(for Pricing and Selection, Scroll Down)
Kingfish. Found in the western Atlantic in tropical and subtropical waters, the Kingfish or King Mackerel ranges from Maine to Brazil including the Gulf of Mexico. The Kingfish is common around south Florida in the winter months and again in the summer for a shorter time. This is a highly migratory species. Kingfish can be distinguished from Spanish Mackerel by the sharp dip in the lateral line under the second dorsal fin. King Mackerel are important to both sport and commercial fishermen. Info courtesy of the International Game Fish Assocations’s World Record Game Fishes guide.

Kingfish Mounts are available online from King Sailfish Mounts. KSM individually crafts each finely detailed mounted fish by hand, one-at-a-time. Every reproduction is airbrushed to resemble that species’ most vivid and striking color patterns. Initially formed to promote the release of local Atlantic sailfish, King Sailfish continues to be the leader in Marine Conservation–now offering all sizes and species of Saltwater Fish Mounts, including the Kingfish.

Variety of Sizes Available: King Sailfish Mounts offers mounts of Kingfish in a wide variety of different sizes. (scroll down for size/selection) The models displayed on this page represent recently produced mounts and/or most popular sizes. For additional selection, contact us by phone or by email for further details: Telephone: 954/784-8377 Email: [email protected]

HOLOGRAPHIC EFFECT. As with many other species, we use paints that slightly change color as the mount changes angles. This holographic “look” gives the mount extra dimension and realism in all brightly colored fish, including Kingfish.
Kingfish Replicas by King Sailfish Mounts….setting The Standard for Excellence. 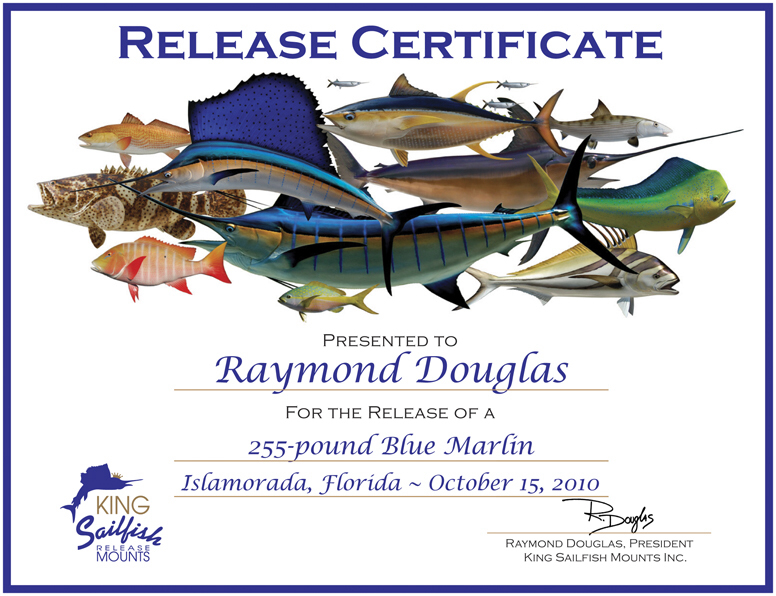 Complimentary Release Certificates – Available Online!
Go to “Log-In-Your-Catch” and enter your catch data in the required fields…..then download, print and frame!
KINGFISH MOUNTS:
Artist Note: Many of the Kingfish Mounts shown here were painted according to a photograph provided by the angler. That explains the differences you might notice in the coloration of the various mounts.

(For Details or To Order, Click on any Thumbnail Image)

to get the latest offers and product releases

We use cookies to enhance your experience. By continuing to visit this site you agree to our use of cookies. More Info I Agree